The Nagore Dargah, often spelled as Nagoor Dargah - of Meeran Sahib Abdul Qadir Shahul Hamid Badshah is a illustrious spiritual shrine in Tamil Nadu. The shrine is located in the small town of Nagore in Nagapattinam District, Tamil Nadu. The Nagore Dargah spiritual centers are actually located at three locations, Nagore, Silladi and Vanjur. The principal dargah is located at Nagore, which sprawls over an area of about 217,800 sq.ft., that is fenced by a massive compound wall, with four stupefying entrances, one each on the east, west, north and south. 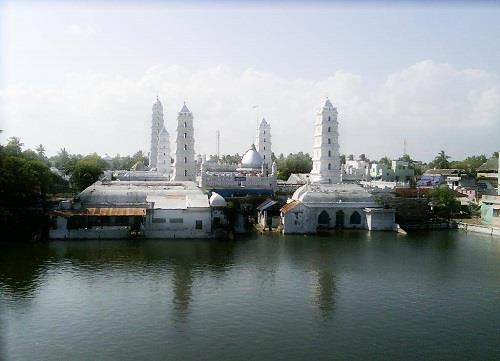 Just ahead of the western gate, outside the compound, is a huge tower called ‘Periya Minara’ (131 feet tall). Nagore Dargah literature exposes that Pratap Singh of Thanjavur (Maratha ruler) constructed ‘Periya Minara’ around 1760 AD, about 200 years after the demise of Hajrath Shahul Hamid Badusha Kaadiri. He is supposed to have established the structure in admiration of having welcomed the grace of Meeran Sahib.

Within the compound of the primary campus, the golden dome edifice puts up three tombs (graves) in three separate chambers. The doorways of these individual chambers are made of silver. In the graves lay entombed the mortal remains of Hajrath Shahul Hamid Badusha Kaadiri, his son Syed Mohammed Yusuf and his daughter-in-law Saeeda Sultana Biwi. 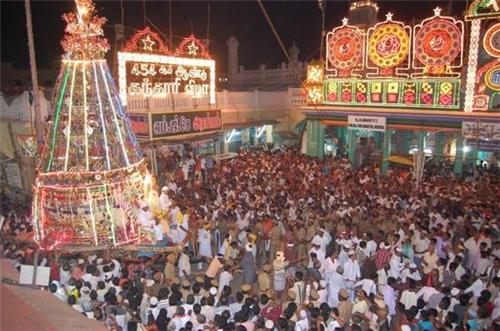 A little away from the tomb of Meeran Sahib is placed a golden box. The contents of the golden box circumstantially are a pair of wooden slippers, considered to have been used by Meeran Sahib. Legend has it that, once a carpenter who was affected by an impairment of normal physical function came Meeran Sahib asking him to give a remedy to his disease. Reportedly, Meeran Sahib did just that by the grace of Allah. The satisfied carpenter presented him a pair of soles for slippers made from the top-quality wood.

Abutting to the golden dome construction is the ‘Peer Mandap’ where the ‘Peer of the Dargah’ continues fasting for three days during festival times. A few meters away is a masjid where prayers are held on a regular basis. Friday congregations in this masjid are nothing short of massive. About 2 km away due north from the primary campus is the Vanjur Shrine where Meeran Sahib reportedly continued in meditation for 40 long days inside a belowground cave. About 1 km east of the primary campus is situated the Silladi Shrine, looking across the Bay of Bengal. 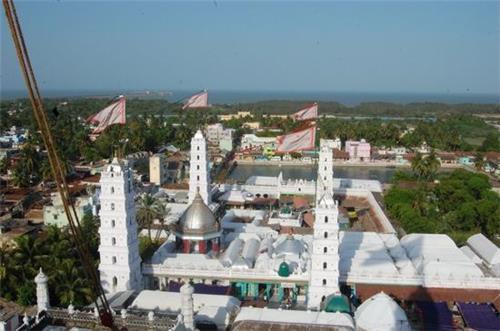 In the history of Nagore Dargah, one name, SV Syed Mohammed Hussein Alim Sahib Washathari (1909 -1982) holds significance. He exacted that he was the 15th generation descendant of Meeran Sahib. Devotees coming to the dargah considered him as a distinguished Peer. He masterminded the activities of organization and upkeep of the dargahs under a legally registered ‘Dargah Trust’.

At present his son, V.M.Shahul Hamid Sahib Washathari, is the Khalifa -al-Qadari and his two son-in-laws are trustees. Alim Sahib Washathari has played a substantial part in propagating the tales of Karamat (miraculous deeds) of Nagore Meeran Sahib. During the year 1963, he published 'The Ocean of Mercy', a Tamil book. The book was scripted by AR Syed Haja Mohideen also known as Ravinder, who is associated with the movie industry. The Ocean of Mercy book has gone for whopping 17 reissues since.

The spokesman and functionary public speaker of the Dargah Trust is called as Dargah Vidvan. Currently the Dargah Vidvan is VKM Ariff Navalar. He has published a foreword, a brilliant work in clear and effective local language Tamil, to the book 'The Ocean of Mercy'. Recounting the legitimacy of the book, he exacts that the biographic story of Meeran Sahib was actually found in the Tamil epic Kanjul Kaaramattu, which was composed in 1898 by Gulam Qadir Navalar and brought out in 1902 by Syed Mohideen Sahib Maraikar - 340 years after the demise of Meeran Sahib. The Ocean of Mercy book distinguishes in effective length the Karamat that were reckoned to have been executed by Meeran Sahib.

The book restates that Meeran Sahib was born at Manikapur near Ayodhyapuri during 1490-1500 AD. His parents Syed Hassan Quddus and Saeeda Ali Fatima were descendants of Prophet Mohammed. He turned Hafiz-al-Qur'an at the age of five. He studied Arabic and Persian. When he became 18 years of age, he moved into the Gwalior kingdom in order to become a pupil of Syed Mohammed Houdu Shathari, who was an instructor and Social crusader, recognized in the Gwalior Kingdom to have functioned for reforming the prisoners. He continued for ten long years with this instructor and influenced to educate the outlaws. On the death of his instructor he proceeded with his noble reform. Furthermore, he took his educatees to Ajmer in order to visit the tomb of Khwaja Moinuddin Chishti. Subsequently he took on a travel with his pupils to Mecca and Al Madinah. He performed Hajj.

On his way back to India, he, with his pupils got on a ship, journeyed across the Arabian Sea and arrived at the lands of Kerala. He shored at Ponnali Harbour of Malabar area. He commenced Islamic Tabligh and continued proceeding east across the peninsula till he reached Kayalpattinam of Thanjavur Kingdom. The power of Thanjavur, Achuthappa Nayakar, learned about the reform works of Meeran Sahib and was much impressed. The Thanjavur king was suffering from a terminal disease. He tried for a cure from Meeran Sahib and he did just that. The pleased king donated him five acres of land at Nagore to Meeran Sahib and kindly requested him to continue in his land.

It is beyond doubt that the hard work of people like Meeran Sahib and Erwadi Syed Sultan Ibrahim is the main reason behind Islam reached even the remote corners of the southern state of Tamil Nadu. Meeran Sahib picked up the unfamiliar ‘Tamil’ language so as to pass around the Word of God and it has to be said that the noble works of Meeran borne fruit.